We're spending our Sunday sleeping because Mommy and Daddy went to the Oregon coast and left us home alone today. It's the anniversary of the day they met a gazillion years ago so they thought they should go out and celebrate the special day. We think every day is a special day with us around so we don't understand why they wanted to go see a lot of water instead of being with us. Oh well, back to sleep now... 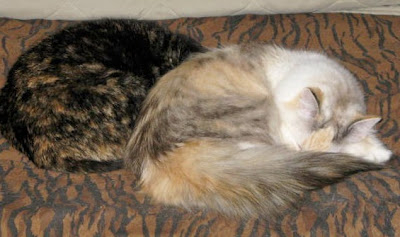 Update on Morgan, the kitty we told you about in this post. He did have his surgery on Tuesday and all of his teeth were removed. The last update received from Michael Elan at It's Meow or Never was that he took Morgan home after his surgery so he could recuperate. The vet was also going to do testing on his tissue and blood. No further updates have been received yet. Thank you to everyone offering support and purrs for Morgan!
Posted by BeadedTail

Wish your beans a wonderful day! And you some good naps of course! ;-)

We are sorrry you were not included in their plans, but naps have their own rewards! It is very cold here still, so we will probably be napping much of the day, too!

Happy "Met You" Anniversary to your mom and dad!

HAPPY Anniversary on the day mommy and daddy found one another, I hope they have a wonderful day today and many, many more to come.

Now you two be very good why mommy and daddy are gone ya hear? I know, I know, while the mice are away the cat will play right? lol! Happy lazy Sunday.

I am so glad Morgan at least got to go home to recoop.

Happy Anniversary to your Mom and Dad - is today their "gotcha" day????


Sniffie and the Florida Furkids

Oh, man! Is there an ocean at the Oregon coast? I want one so bad - but Storm said I shouldn't hold my breath. Why can't I have an ocean!?!? Just "'cuz I live in Kansas" seems like a flimsy excuse!
Play bows,
Zim
PS: Happy Metcha Day to your parents!

That's what we're doing, too - snoozing.

We're sending bunches of purrs to Morgan 'cuz we can appreciate what he's going through. I hope his recovery is quick.

Great post!!!!! I love it!
Hope you guys had a wonderful day at the Coast while the babies were snoozing!

Happy Anniversary!! I hope you had a great day!