Today, November 3rd, is the official 2nd anniversary of the Gotcha Day of Isabella and Angel. My previous two posts told of how both kitties picked us to be their forever home but as I noted yesterday, Angel was a 2.2 lb sick little 3 month old kitten so bringing her and Isabella into our home with our two dogs, Sadie and KC, was quite an ordeal. The dogs were not all that happy to have those two kitties come into their house! Although both dogs had been raised with cats, most recently being Panther, the prior cats totally ignored the dogs and if the dogs got too close, they'd get hissed and batted at until they retreated or the cats ran off. Because of this, cats were still a mystery to them and a form of entertainment since they made funny noises, boxed noses and ran away really fast. Now to have fragile little Angel and not afraid of anything Isabella come live here was overwhelming. Angel always wanted to sit next to Sadie on the daybed but Sadie wasn't sure what to do with that little white thing next to her. 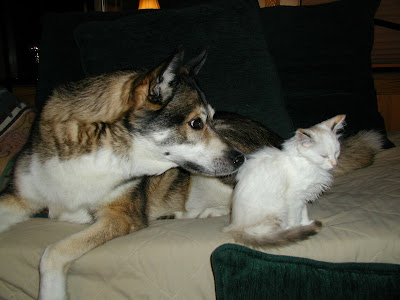 Isabella didn't have any transition adjustment at all. She felt right at home the minute she got here but we still had to confine her to our home office and a large walk in closet at night with Angel because Angel had worms and other ailments that caused everything that went in one end to come out the other. We took her to the vet right away and was given liquid medication that she had to have every 4 hours for 7 days. Those first few days I hardly slept and spent most of the night sitting on the floor of the closet holding them both. Angel's weight kept dropping and she got down to 1.6 lbs and we were worried she wouldn't pull out of it. It was very stressful and often times very overwhelming. But as the days passed, she did get stronger and has obviously rebounded into a very healthy, beautiful kitty. 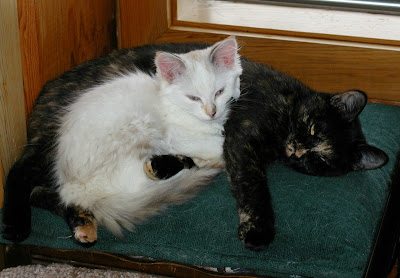 As I mentioned before, Isabella was named Miteeka but she quickly told us her real name was Isabella. Angel was too small to tell us her real name but we knew it wasn't Mia. One night as I was holding her on my lap, I noticed how the black markings on her head and ears looked like wings and since she had to struggle so much to get well, it was only natural that she'd be named Angel since she was obviously touched by one - one named Panther actually - and she had the wings on her head to prove it!

After about three nights of being confined to the walk in closet, they had the run of the office all the time and after another two days when Angel could get around better, they had the run of the entire house and things have never been the same since! Isabella is the diva kitty and has Daddy wrapped around her paw which I believe actually started that very first day when he opened her cage and she fell into his arms. Angel loves to play and be up as high as she can get - two things that she was unable to do with the other kittens at the shelter because she was too sick so she's been making up for it ever since! Both are the best kitties we could ask for and I am so thankful that they both picked us two years ago today! 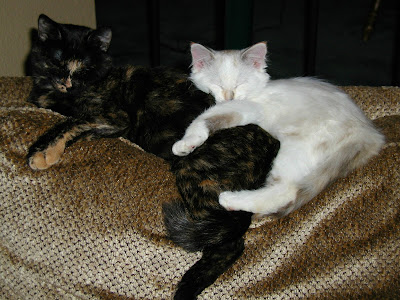 To celebrate, we are offering 25% off ALL Bracelets in our BeadedTail shop! This offer is through midnight PST tonight, November 3rd. Please note, the sale is on bracelets only. When purchasing, put Kitties in the "message to seller" and if you pay with PayPal, I will refund your discount or you can request that I send you another invoice from PayPal.

KC and the Giggleman Kitties said...

Hi, I saw your comment on Miss Peaches blog and had to stop by and visit. Your kittens are just adorable. Oh and I see you have an Etsy shop. I love Etsy, maybe a bit too much. I shall stop by and visit.
Really enjoyed the Gotcha Day Story, too.
Stop by and visit our blog and the Cat Blogosphere (http://www.blog.catblogosphere.com/). My little tortie, KC, is a "reepurrter" there.
ML

Yay! We are very glad Angel got well! Both Isabella and Angel sure knew where they wanted to live!

What a beautiful story. Angel is extra lucky to have found you because you didn't give up on her. You two must have a special bond.

I can see why your were worried about Angel. She looks pretty sick. I'm glad you found her or her story might not have had such a happy ending.
Marnie

I never knew the story behind Angel, she was quite ill wasn't she? I'm so glad she was able to rebound though. I'm sure all the love and care she got in her new home was the reason! She's very lucky...they both are!

Awww - I loved reading the conclusion to this story!

These are the nicest photos, and the best story! I am so glad you took Angel in and cared for her (it's difficult to believe she was so tiny and frail when I look at photos of her now - especially when she's sleeping on top of Isabella!)

I love a happy ending!

Wonderful story of these two rescue cats. Thank you for sharing. I was pulling for Angel all the way. What special friends you have in Angel and Isabella.

And they are so beautiful. Sometimes, I think, it is difficult to look past the dirt and such and see what they can be in your care.
Bravo to a job well done!

What beautiful kitties with such a great story! So lucky are they to have a wonderful home.

Another wonderful story that made my day! What a happy home! I will go take a look at your store! Love your stuff!

I especially love the last photo. So adorable!

poor sadie...well, it IS her daybed!

Panther did indeed send Mia to you...that is the way it goes in the circle of life. Our cat how goes before will send down the next one he choses just for that empty spot he left in our hearts....
Bless you both on this your Gotcha Day!
Love Miss Peach formerly from the Flint Hills and loving the memories of those prarie days!

I love that picture of sadie and angel :)

Last night I kept trying to say what a heartwarming story this has been, but I couldn't! ;-)

a sweet story with a very happy --not ending--continuation!