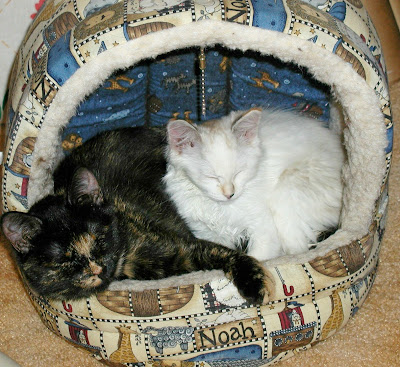 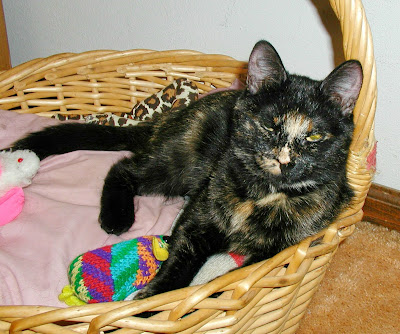 I had lost my 18 year old kitty, Panther, on August 29, 2006, and was unable to even look at the neighbor's cats without breaking down so the thought of getting another kitty was very far from my mind. Although I couldn't go into the humane society at this time, we often donate items to a local thrift shop that benefits our humane society and they have adoptable cats in the front of the store. We donated several times after the loss of Panther but we'd take our donations to the alley entrance in the back of the store and I'd sit in the car crying since I knew there were cats needing homes in the front and I was not ready to face that.

On November 3rd I decided I was ready to go in the front entrance so we walked in and went into the room with the cats in it. I bent down and was looking at a black and white cat named Katie while my hubby went to the cage above me, opened it and Isabella, then known as Miteeka, literally lifted up her front legs and fell into his arms when he went to pick her up. When he went to put her back into her cage, she hung on tightly to him and pretty much made her point that she had made up her mind and we were to take her home. Needless to say, she got her way! 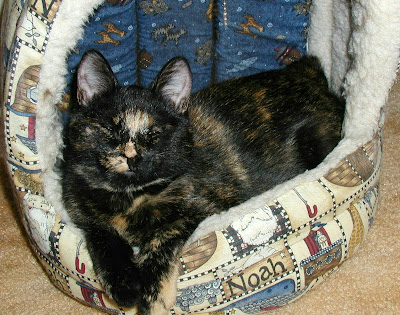 In order to complete the adoption for Isabella we had to go to the humane society to fill out the paperwork. While there, I ventured around and...

To be continued tomorrow!

What a great story about Isabella. I cannot wait to read about Angle! Happy Gotcha Day!

Isabella chose her Daddy! Yay! We can't wait to see how Angel chose you!

What a SWEET story! And I can see that with a kitty that determined you just HAD to bring her home! Cats know a good thing when they see it!

I have problems going to the humane society too - I always want to adopt them all.

What a lovely story about Isabella - she is a very sweet kitty and it's great she found such a good furrever home. Cant's wait for the remaining half of the story...have a Happy Halloween!

Many concats to Isabella and Angel of their second Gotcha Day!

I love the stories about your cats. I have 4 myself.

It was meant to be and love at first sight! I think you just know. I love cats!

I'm sure glad Isabella got her way! :)

Looking forward to the rest of the story!

Hi...
Thanks to advertise on m blog with EC

Thank you for coming by to say hello to me today! How very nice to meet both of you. I loved reading your Gotcha story Isabella. Your mommy makes very nice bracelets and ear rings. The glass kitty beads are very cute.
Have a wonderful Sunday ....
Love Miss Peach

We stumbled upon these Gotcha Day posts and loved reading how you girls adopted your humans. What a long way Angel has come! From a sickly kitty to the beautiful ladycat she is now. Wow!
Purrs, Siena & Chilli

aawww....That's so sweet! Isabella is a very smart kitty!

Followed links through Entrecard and found your blog, your Isabella looks just like my precious Kizmet whom I lost a couple months ago to Liver Cancer. So while I smiled, I also cried while reading this, they sure bring so much joy to our lives. Im happy to hear you made your way into that store that day :)

I loved reading Bella's story. It reminds me of mom and me.