As I posted yesterday, we are celebrating the 2nd anniversary of Isabella and Angel becoming a part of our family on November 3, 2006. Yesterday I told the story of how Isabella picked us and once she made it known that she wanted to be a part of our family, we had to go to the humane society to complete the adoption paperwork. While there I ventured around and walked through all the rooms with kitties. As I had said, I hadn't even been able to look at another kitty without breaking down after the loss of my Panther so for me to be able to see all the kitties in cages and stay sane was a big accomplishment. 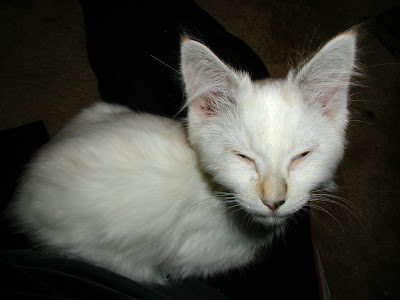 I came to an enclosure which had concrete brick walls up to about half way and then windows to the ceiling. This room also had a glass door to enter but I stayed in the hallway and looked in. In one corner there was a kitty tree which had four or five tiny kittens playing and fighting on the top level and the next level had another two kittens on it. I was thinking, "oh my, look at their energy. Good thing the kitty we picked is nearly 10 months old and already past that stage!" Remember, my cat Panther was 18 years old so kittenhood had come and gone long ago for us. 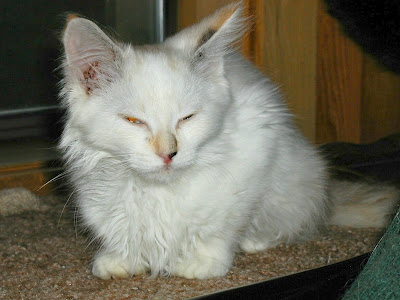 I went over to read the bios of all the kittens in the room that were taped to the glass door. I was able to match up all the kittens to their bios but one - a white female kitten named Mia. I looked and looked and didn't see the kitten so figured she was adopted but then I looked off to the side and she was sitting away from the other kittens with her eyes closed but occasionally she'd look up at them playing but then close her eyes again. Of course I immediately felt that this kitty needed me but we already had decided on adopting Isabella. I stood there and watched her and as I was about to leave, she looked over at the door, looked up at me and came running to the door. That sealed the deal - she picked me too! I went to find my hubby - he was waiting in line to fill out the paperwork on Isabella and he didn't even argue with me when I showed him the kitten because he could tell I had already made up my mind! We were picked by two kitties on that day! 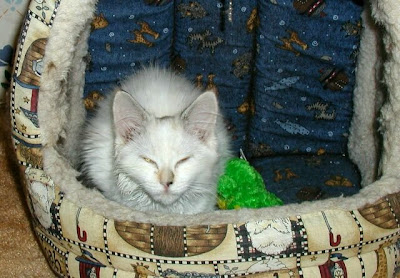 Oh my goodness, Angel does look so tiny! What a wonderful story about how she and Isabella were adopted. I am looking forward to reading about their introduction to your home.

ps: sorry I made a little typo on Angel's name yesterday :(

Angel DOES look tiny! You're making me want to rush out and adopt another kitty! I'm so glad your two found a good home.

Oh how I love hearing stories about how kitties get their forever homes!!!!!!!!! I look forward to hearing more :)
Purrs Mickey

Angel's story made Mom all happy leaky eyed! You really were chosen by your kitties!!

We loved this story and can't wait to hear the rest. I also picked Mom when she came to get Gandalf's litter mates for our Uncle Allen. I was a year old and all alone in a large pen. She saw me giving her the love eyes and that is all there was to that! -Grayson

Such great stories of how Angel and Isabella picked their new families!!! I find it hard to venture into an animal shelter and not want to bring home every dog or cat there!

I'm having so much fun reading these stories!

Angel looks so fragile and in need of help in those photos - thank you so much for choosing to adopt her. I'm looking forward to hearing the rest of the story.

It's amazing how the cats chose you. That's so precious and you are so nice to take both cats when you first only intended to take in one. I look forward to reading more tomorrow.

What a great story about two beautiful kitties! The cats we used to have picked us, too. They were terribly neglected by our neighbors and used to crawl through the chain link fence to come play with my daughter. You can see their pictures in my Etsy shop...Sebastian & Snowflake.

Hi,
Angel is very lucky to have found a good home. She looks so happy and healthy now. I'm enjoying your stories of Isabella and Angel becoming a part of your family. It is just wonderful! :-)

Angel looks so itty bitty and camera shy with the cute squinted-up eyes...aww...

These are the kind of stories that make my day. Shelter pets are the best. All of our animals are from high kill shelters or the streets.

That's an amazing story. How wonderful that Angel picked you too. Look forward to the next part..

You are too adorable, and this gives me Kitty Fever,but my husband says, "one more furry child & I move out". Hmmmmm......some days, that sounds like an ok trade???

Oh Angel you are such a smart kitty!! Well done indeed. I have two kitties in my cozy cottage garden right now. Hunny Bunny and her elusive kitten. They are both white with blue eyes...
Oh BTW, Kansas totaly rocks and we think the Queen has lost her marbles...go Wildcats!

Angel is lucky to have you. What a wonderful story. Thanks for sharing.

What a great story! Angel is a very smart kitty, as well as Isabella! They certainly knew how to pick their furever homes!

I had never seen this story. Fascinating. I loved it and how they chose you. xxxxoooo