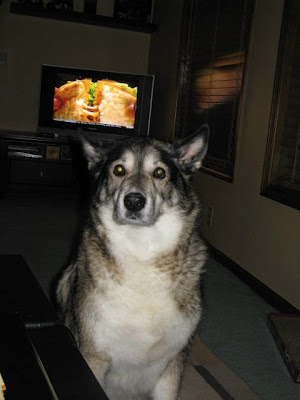 Funny you should mention. Apparently Taco Bell is a bad omen here in the ER. I have been warned NEVER to bring Taco Bell, send out for Taco bell or say Taco Bell....

From what I hear, all hell breaks loose...lol

Do you want Taco Bell? I'll order you some for delivery! Ho ho ho!

Are you trying to tell us something Sadie? Is that commercial making you hungry?

Don't you hate yummy commercials when you are trying to watch TV? They make you want to go to the Fridge for a snack...!!! Resist the temptation Sadie! All that salt ~ not good for pups! :)

Woof! Delish ... got to watch your calorie intake. Lots of Golden Woofs, Sugar

You're asking for a burrito?

You're a little bigger than the Taco Bell dog, but much cuter!

I understand. I love me some Taco Bell too!

Get her some Taco Bell :)

Sadie, is this your audition for the Taco Bell mascot? You have my vote.

Claudia loves the snow.She hops around in it like a bunny rabbit.

Sadie is a much better pitch-pup than that little dog (can't spell chiua...) they had!
Okay, now I'm hungry (what else is new?).

NAK and The Residents of The Khottage Now With KhattleDog! said...

We Sibes know how to make a run fur the border!

No smile, Sadie??? You must be hungry!

bigger than the usual yo quiero taco bell dog :0 But even better..they should use Sadie to promo those giant items they serve now :)

So did they listen to you? did you get some Taco Bell?

Mom should send this pic to Taco Bell and get them to use it in their advertising.

Haha! Did you know our mom still has one of those Taco Bell dogs that they gave away???

Since you can speak the language, and you're purfectly woofable, I too vote for you to be the new Taco Bell dog...

That does look yummy Sadie! I like ooey gooey cheese! Love, Moon