Let us all celebrate ~ World Cat Day.
Celebrate kitties in your own special way.
Those here and near, and those now above,
all the kitties so dear, all the kitties we love.
August 8th has special meaning to me for two reasons. For one, it's my 21st wedding anniversary. (Happy Anniversary J!) In addition, it would have been the 21st birthday of our cats Reebok and Panther. Since it's World Cat Day, today's post is in memory of Reebok 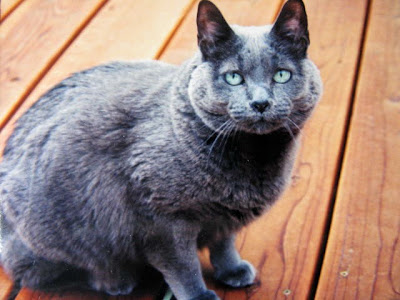 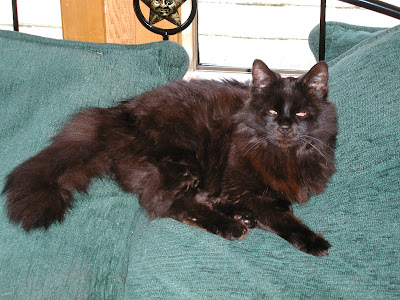 Reebok and Panther were orphaned when they were just a few weeks old after their momma was hit by a car in the alley near our house in Topeka, KS. One morning when I went outside I heard their tiny mews so went towards the sound. Two itty bitty kittens came running out from under a bush. Of course I took them inside, gave them our cat Tiger's canned food but they just pushed it around on the plate with their noses - they didn't know how to eat and I didn't know what to do! I called my mom and she brought over KMR Kitten Formula and bottles and we proceeded to bottle feed them. Reebok got her name because she was so tiny she slept inside a pair of sneakers. Panther was named because she was a black poof ball of a kitten.
In 1998, Reebok was diagnosed with kidney failure so we had to give her IV fluids every day. She remained happy and strong until we lost her to cancer in 2001. The picture of her in the bag was taken on her last day. She loved bags and we let her enjoy one for the last time. 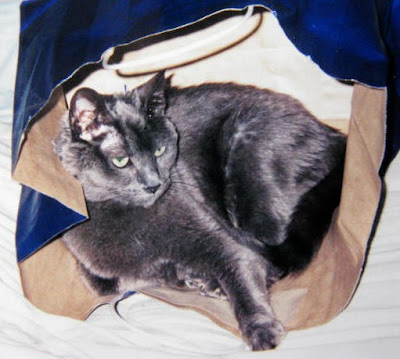 Panther was a cat that only liked me so she hid most of the time unless she was sitting on my lap. After moving to Oregon in 2003, she seemed to thrive and was out a lot more and occasionally let others pet her if I was around. She was truly a cat who could say "I'm not fat, I'm fluffy" because she only weighed 5 lbs. She was very happy and seemed so healthy but on the day after my birthday in 2006, Panther died unexpectedly of fluid in her lungs. 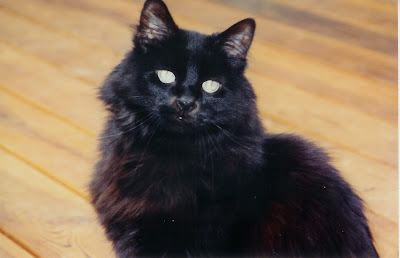 In addition to Reebok and Panther, I'm celebrating all my cats who have crossed the Bridge including Sugar, Pepper, Mikie, Tiger, and my mom's cat Jessi. And of course I celebrate my cats who are with us now, Angel and Isabella! All my cats have brought great joy to my life and I love them all!
Happy Birthday Reebok and Panther!
Be sure to celebrate your cat today and give them a big ol' hug!
Angel says treats would be nice too!
Posted by BeadedTail

I wish I'd known it's WCD today!

That poem in the beginning of your post is very sweet :)

What a nice post to honour all the kitties that have found a home with you...

Now that I know it is world cat day I shall go and hug Tysie, and think of all my cats who have gone over the rainbow bridge too.

Beautiful post. Reebok and Panther were both so cute and adorable cats and it's great to know that they shared so many wonderful years with you after being orphaned at such an early age.

Hope you and the cats have a very happy World Cat Day :)

Lovely memories from
Reebok & Panter ...
Very sweet to think about him all.

First off I want to wish you a happy anniversary! Thanks for letting me know today is World Cat Day--never heard of this. I wish I could find a treat Manny would like. My cats don't much care for the Temptation treats--I have chicken ones. Maybe I should try a different flavor. I will give Spunky some tuna flakes today--she likes that!

I am a cat lover as well. I couldn't start to name all my cats. For 1, I wouldn't have enough time or space and 2, I can't remember all their names but they were, and are, loved very much. I have 4 right now and one of them looks just like your Isabella (I think that is her name). Thank you for sharing your story.

First I have to say Happy Anniversary!

And now I have to say that your post brought tears to my eyes. You are such a wonderful, loving person who cares so much for her animals :) I know Reebok, Panther and all others who have entered your house have lived the best life they could have ever dreamed of!

Happy Anniversary. Your wedding and the day I got the frantic phone call that you found two very young kittens are two days I will never forget. Have a good and fun day today.

Wooos! Happy Anniversary and
Puppy kisses for your kitties from me!
-Kira The BeaWootiful

So many things to celebrate on one day!

We loved hearing about Reebok and Panther, they both look like they were wonderful cats!

And Happy World Cat day! We hope Angel and Isabella are having a great day!

A beautiful post about two very special kitties. Happy anniversary to you and J.

What a super post! Reebok and Panther look like super cats. We're honoring those who came before too.

Oh, good a holiday to celebrate all the kitties in my life! It was nice to see your kitties who have passed, and to hear their stories.

Gosh, they have all had - all of you, some life in Topeka! Didn't know it was World Cat Day! Need to spread that around!

Happy Anniversary - and you have me all choked up talking about your kitties who've crossed the bridge!

That was so very sweet! Happy Anniversary to you and yours. I loved the stories about your kitties. You are a special lady.

Well this is a very special day for you guys! What a wonderful way to remember those who came before.

Happy Anniversary and loved hearing about Panther and REebok. I think they are happy with my beloved cats who have crossed over. What a lovely post.

Happy Anniversary! What a lovely post and memorial to your sweet cats.

This is indeed a special day for you....

What a beautiful story about Reebok and Panther! Happy birthday to them - and Happy World Cat Day to all!
Play bows,
Zim

Wow, this is a big day! Happy Anniversary, happy World Cat Day, and Happy Birthday to your angel kitties Reebok and Panther.

This is a wonderful post! Happy anniversary to you and Jaime, and happy angel birthday to Reebok and Panther. We loved the tribute that you wrote to them.

Love and purrs from Katie, Franklin, Dobby, and Tasha

What a great honor to all cats...past and present. Kirby is sitting on dh's lap celebrating and being petted. Katy is patiently waiting her turn. Happy Day to all our feline friends!

Tank woo fur sharing your past khat-tail tales with us!

As fur giving woo some hugz, khome on over and I will!

If woo don't want to travel THAT far, I'm sure Sadie will khover it fur me!

World Cat Day?! I had no idea....
Your Panther is a lot like my daughter's cat Cy--black, fluffy, not weighing much. (my blog post-Asheville kitty)
We had a cat we loved dearly, Misty (we called her Mitty) to whom I had to administer IVs every day (twice). She lived probably only a month after that started.
I've had and loved many cats over the years. My first was named Chocolate.
and Happy Anniversary! I hope today is wonderful!

Happy Anniversary!
Happy World Cat Day!
What a beautiful post honoring all the special kitties past and present.

What a lovely tribute to Reebock and Panther (who looks like my Sweetpea - size and all) and to all your past and present cats. They are all very special. Happy WCD!

Happy World Cat Day! Reebok and Panther are so precious. I've had two black cats before - one didn't like anyone but me just like Panther.

Happy 21st Anniversary!! I hope you were able to do something fun. I want to thank you for sharing those stories. They brought back a lot of memories to some of the cats we had...Sailor, Bear, and Minnie. I just regret not taking more pictures of them.

Didn't know there was a national cat day.
Your cats look great and happy.