Have you ever heard that saying that "you never know what goes on behind closed doors"? Or maybe the expression "you only get one chance to make a first impression"? Well, here's our closed front door... 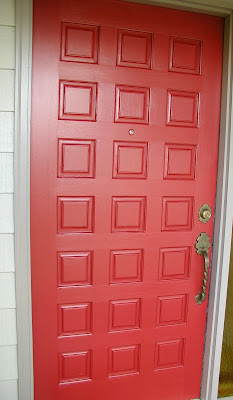 And here's what goes on behind it! 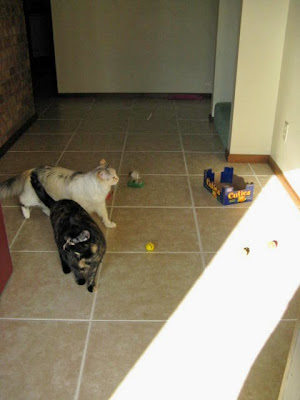 What's the first impression from seeing this entry way? 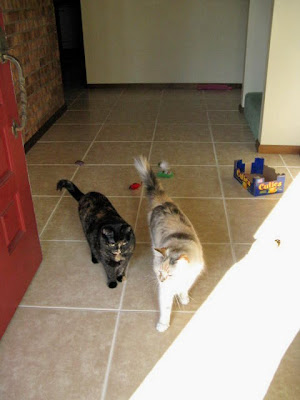 All visitors get greeted by the furbabies. If they don't like animals, they don't make it in the house! 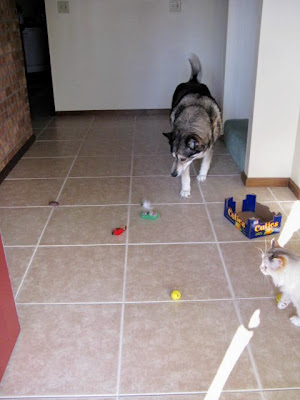 Disclaimer time now....there usually isn't as many toys or even a box laying in our entry way but during tax season thing such as picking up after the pets tend to get neglected. That being said, there's a pile of toys on either side of the door that can't be seen in the photos. In the last photo, Isabella isn't in view but is behind the door playing with her Ladybugs!
Posted by BeadedTail

Hi there,
I haven't visited in a while, how are you guys doing. Looks like you are all well. I like your front door, nobody could tell what was going on behind that door.

I have an award for you at my blog.

The door is sooooooo beautiful, red I like it very match :)))
And behind the door its looks very nice and clean for the cats!!
The cats have their freedom =^.^=

I love being greeted by animals at the door. What fun!

First Impression: A home that loves and respects its animals - that's the best kind of home, and don't worry about the mess...every time we pick up after Arwen, it only takes about 30 seconds for every one of her toys to make it back scattered throughout the house ;-)

We like to greet people too! Except for Rosie, of course. She runs and hides. We like your red door; we are getting new dark green ones when we redo the siding and shutters!

At our door, you have to get by Scampi the scary! SirbarksALOT drives most visitors off. In other parts of the house the kitties are always playing behind doors, and pushing their toys under them. Silly Khats!
-Kira

No matter how much I clean up, there's always cat toys and empty boxes lying around for the Monkeys. Anyone who doesn't like it, shouldn't come over.

That 'Cutie's' box made me laugh because I remember the picture of Isabella sitting in it :)

My kitties are very different. They hate strangers.

They never leave their toys in plain sight either. They get them stuck behind something and I have to do a toy search and rescue find and pull them all out.
Marnie

I think it looks very clean and uncluttered compared to our entryway! Ours is just part of our living room, and it's always full of shoes and cat toys.

You win! You have more cat toys than us!

Hey guys...know what's funny??? My living room looks just like this too, cuz it's covered in my birfday toys! Thanks for leaving me a birfday message over on my blog!! I had Mom put up lots of fun pictures of my birfday party today so go check them out!!!

And has lots of fun wif your toys while they're out!

I usually keep one of my real dinosaur bones (usually the blue one) by the front door. That way, if anyone comes to visit, I can give them my toy. I always bring something to the party. Woo.
Luv,
Dave

Beadin By The Sea said...

Oh, what a fun place you have with lots of activity. Love your red front door, so cheerful and welcoming.

Looks like the entrance to my house. Toys all over the place.

Funny! My little human babies leave a trail behind them as well:)

I love the door, and I feel bad for people that I visit that don't have pets. We once had a guy come over who was scared of one of our dogs, and he asked if we would put her outside. I said no, it was drizzling out and he said, but she's a DOG. I said, she lives here and you don't Buh-bye now.

Beautiful door...love the red!
Let the toys pile up...they just show that you have happy furbabies :)

You can look at it as a 3-stage security system. If they don't trip on the toys and don't trip over the cats, Sadie is there to take care of the rest. Good luck with those taxes:)

ha ha ha...looks like my house as often as not! Usually we wake up to quite a few "mouse" and other toy presents littering the floor of our bedroom. (This is NOT in the entryway of our house, in case you were wondering.)
These "toys" have included the following: coasters, paintbrushes, and most amazingly, a thick glass votive candleholder. And these are brought all the way up a flight of stairs.
Who brings us these treasures, you ask? our 2 cats.

it looks like a door i'd love to walk through!!!

I LOVE your red door. There was this house I wanted once that had a red front door and a green garage door. Different but beautiful. If I came through your front door it would bring a huge smile to my face!

The Welcoming committee is adorable!

Jane is the official greeter here and RUNS to the door! Sometimes she sits just inside the door, to the side, ready for the ever popular ankle rub....she's tripped a few people....

I love the red door and of course the welcoming committee.

I LOVE the RED DOOR! Very inviting and so are the furbabies~

Nice door. N just like my house where four of my cats will await

What a beautiful cat !

what a treat to see what's behind that door! By the way I love it!

There's always toys laying around the house here... You'd think we had children! But, I guess we do. Our furry friends are our children. ♥