We're going to share some tidbits of information about ourselves today. Hopefully you enjoy getting to know us better!

Isabella was formally known as Miteeka until we adopted her on 11-3-2006. She then told us her real name is Isabella! 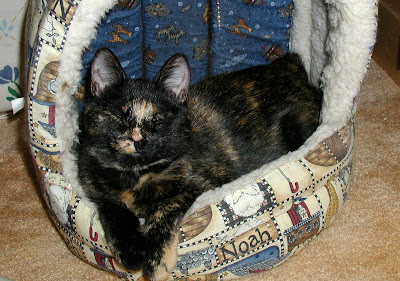 Sadie has never given puppy kisses to anybody. Unlike most dogs who give kisses or lick your hands, Sadie keeps her tongue to herself and has never kissed anybody!

Angel was known as Mia prior to us adopting her on 11-3-2006. She was named Angel because of the black marks on the top of her head and ears. The markings looked like angel wings and we have a Guardian Angel kitty in my beloved kitty Panther who I lost two months prior and she blessed Angel for us!

Isabella doesn't meow, she squeaks. Especially when her daddy leaves, she squeaks up a storm at the door and she does the same thing when he's due to come home. Never say that kitties aren't loyal and smart (but they are spoiled)!

Sadie doesn't like her feet to be touched. She'll growl up a storm if you just barely touch them and we've never figured out why. 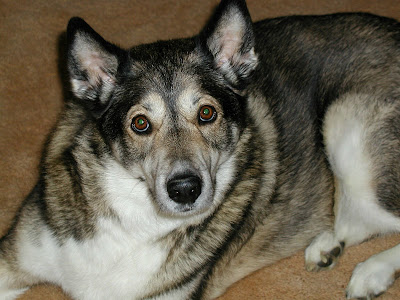 Isabella is a wet noodle cat! As soon as you touch her to pick her up, she goes limp so it's like trying to pick up a wet noodle.

Angel likes to be picked up as if you were picking up a small child (hands under the armpits) and then carried around draped over your shoulder (front legs at your back, tail swishing in your face). When I shut down my computer at night she comes running and gets on the desk, puts her front paws up to be picked up for her nightly trip around the house dangling over my shoulder. She does this many times throughout the day and will jump on anyone's unsuspecting shoulder if no one pays attention to her. 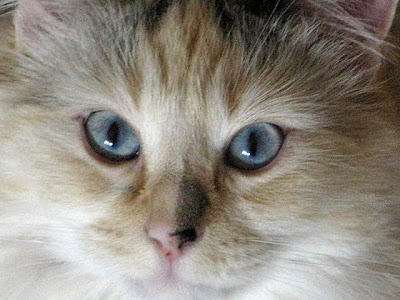 Pumuckl also doesn't like to be touched at his feet - he is ticklish there and at his belly! ;-)
Wish you all a great weekend!

Gandalf and I both like to ride on Mom's shoulder. I will even ask to be picked up! -Grayson

I love hearing about all the cute things that animals do. I have a kitty who gives me massages.

I love the portrait of Angel!

Isn't it interesting how cats have different little quirks? Mine have lots of quirks that make them very special to me.
Marnie

Aww! That is soo sweet. Thanks for sharing these wonderful facts about your beautiful pets. :) That photo of Angels eyes is stunning. :)

Those are some interesting facts about you all! It was fun to get to know you better.

My name is Cleo. I do not like to be picked up and my name at the shelter, given to be by those bad humans who put me there because they were having a baby, was Brooke. They lived in an apartment and kept me in a cage a lot.

My new Mommy let me adopt her, even though the entire shelter was on lockdown/quarantine for several weeks before she could come back to bring me home about 7 years ago.

She knew immediately that my real name was Cleopatra. And, she lets me stay outside as much as I want, which is all of the day and night except when I go into that HUGE building for a bite to eat now and then throughout the day.

I LOVE when my skin-parents pull my tail and spank me. Makes me purrr and want more lovin.

I will only eat dry cat food, no wet, no treats, no people food. Its all just, well YUCKY to me.

BTW, there are five others of us and a dog about our same size here, but I really prefer being an only child.

Nice to meet you Isabella and Angel. Your skin people seem like the best. Ummm...the same as my skin people are.

Very interesting facts and it's great to learn more about all of you. It's interesting how Angel likes to be carried around - maybe I'll try that with Leo or Fairy..Snow is too big for that..

Loved reading this!
Tasha (who looks just like Isabella) squeaks and chirps instead of meowing too - maybe it's a tortie thing! The only time she meows is when she has to go in the cat carrier. She's a big daddy's girl too - lots of squeaking when he comes home from work.

Nice to meet your family :)

Beaded, it is so nice to learn about you and your fur babies, they are all just adorable!

Your babies sound so sweet. Beautiful pictures of them ...