Okay, I know the calendar says it's October and officially fall but it didn't really seem that way until the rains started here in the Pacific Northwest today. Hopefully it's just temporary and hasn't settled in until April or May but I'm already longing for summer again! I thought I'd share some of the beautiful places to see here in Oregon year round to remind me of the beauty here despite, and maybe because of, the rain.

I took this photo when we went hiking on the many trails around Multnomah Falls east of Portland. There are multiple waterfalls in the Columbia River Gorge area not as majestic as this one but just as beautiful! 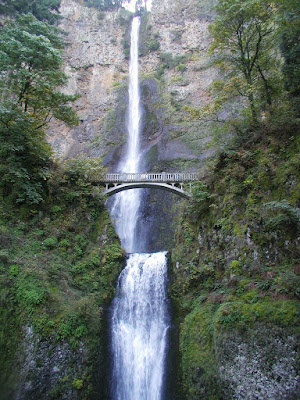 I took these pictures in September 2007 at Crater Lake in Southern Oregon. Crater Lake was formed 7,700 years ago when a volcanic eruption caused the 12,000 ft Mount Mazama to collapse. It is 1,943' deep which makes it the deepest lake in the United States and the 7th deepest in the world. The fresh water is so clear and is a gorgeous shade of bright blue. It is certainly a place that must be visited in Oregon! 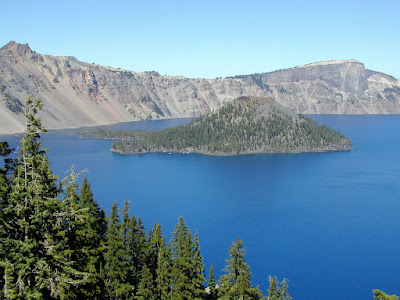 Sadie went with us on these day trips around Oregon. She loves to go and loves to have her picture taken - don't you Sadie? 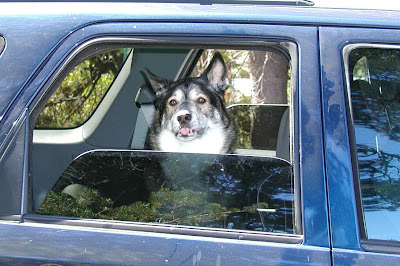 Can you believe she's sticking her tongue out at me?

The majesty of your photograph's is breathtaking. I LOVE the very first one and would like to build a house somewhere close enough, with the river/creek on the acres, and acres of property. Swooning!

Those pictures are amazing, you are so lucky to have visited there!! Your dog is also a cutie! :)

Those views are spectacular...and much nicer than the cloudy gloom outside now.
And that pooch - just wanna give him a big ol' hug.

Those are some beautiful places. That first picture is just stunning! No wonder Sadie likes to go with you ... :)

I love going to Multnomah Falls! It's a huge hike to get to the bridge, but well worth the effort. Last time I was there was about 5 years ago. This makes me want to go back again. I have a lot of happy memories there:)

I have never been any farther west than Illinois, but your pictures are absolutely wonderful. I had heard Oregon was quite lovely, your pictures prove it, cute dog too.

Oh, those places ARE amazing. Hopefully one day, I'll get to see it in person.

What a beautiful sight!! I feel peaceful just looking at the pictures. What a hilarious pic of Sadie!!! Love the tongue sticking out!

Congrats you were one of my top 10 entrecard droppers. I sent you some linky love.

Wow! Absolutely beautiful. I have yet to visit the Pacific Northwest, but it's on my to-do list.

I adore Oregon! I have toured extensively through Oregon three times, all along the coast and into the interior. We saw Crater Lake, Bend, loads of rivers and waterfalls, and mountains, gorgeous beaches...I a could go on and on! I highly recommend Oregon for a vacation!