We were given the opportunity to try out Addiction pet foods and we accepted the responsibility with gusto! Mommy wants us to eat healthy and lose some weight. We just want to eat and we're just fine with our weight. Anyway, we all got new foods to try and so Mommy will give are our results. 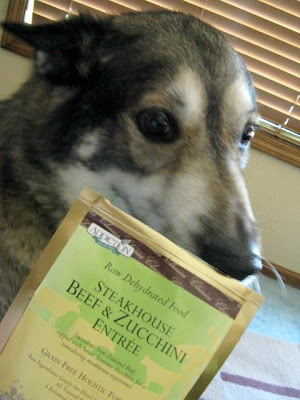 Sadie usually eats dry food so she tried the Viva La Venison dry food as well as the King Salmon & Potatoes canned food and also the Steakhouse Beef & Zucchini Entree which is Raw Dehydrated Food. She liked but wasn't enthusiastic about the Venison dry food. We mixed it with her current food and she sniffed it but was content to leave it sit for awhile - i.e. until the cats came around and then she ate it. That was not the case with the canned food, she really liked it! But the dehydrated food was her favorite! The sample bag only had about a cup of the dehydrated food so at first I mixed about half that with 1/2 cup of water and gave that to her. She wouldn't stop licking the bowl once it was gone so I went ahead and gave her the rest. Of course she wanted more. According to the bag a serving for a dog her size is 4 cups so I don't know if that much would satisfy her since she was certainly not satisfied with only 1 cup! 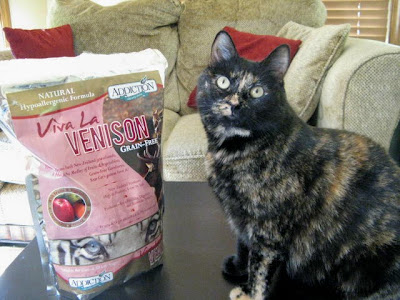 Angel & Isabella also tried the Viva La Venison dry food and the King Salmon & Potatoes canned food and also the Unagi & Seaweed canned food. They normally eat dry food with canned food given as an occasional treat. They did like both varieties of canned food, however, since I only gave them half a can at once they didn't eat the King Salmon & Potatoes after it had been refrigerated. They liked the Unagi & Seaweed both fresh out of the can and also from the fridge the next day. They liked the dry food right from the start and seem to get full quicker so hopefully they won't eat as much! 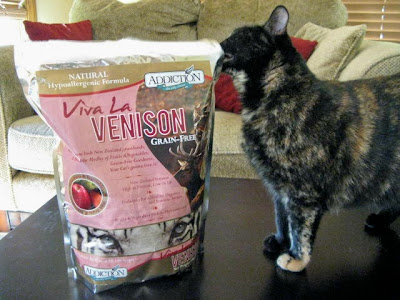 If healthy foods taste as good as Addiction foods, we think it's okay to switch. But we will not give up our junk food Temptations! 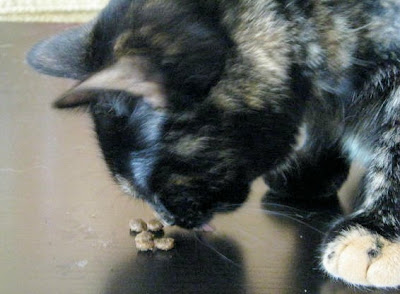 Hope you enjoyed our review of Addiction foods as much as we enjoyed eating it!

My mommy gives me only, and I mean ONLY special dietary dry food that is sooooo boring. Your report made me salivate...but mommy says she wants me to have a long and healthy life. Whatever.

We have also tried the grain free diets - for our toy poodle and for our cats. The toy poodle loves her grain free dry food and has lost some weight on it. The cats love the grain free and eat less. They also hack up fewer hair balls and seem to have less poo (TMI I know, but I love having less to scoop!) Our foster kittens were sent home with us with a bag of Science Diet kitten food, which they ate but once I offered them some of the grain free all life stages food they gobbled it down!

Mom says Siberians are known fur being efficient when it khomes to food intake...fur our size, we rarely want as much as the bag 'says' we should get!

never heard of the dehydrated food before. Sounds expensive!?

That's a great review! We definitely want to try that food.

Love the pics, Sadie and Isabella, you make great models

I'm glad you enjoyed your new foods! We noticed that since we switched to raw, our poopies are real small and not smelly. My Mommie likes that!

Great review - and you all did such a good job posing! We are really glad you liked the new food! You know we are big fans of Addiction dry food (it took a while to get Tasha to stop asking for junk food, but she is OK now). We noticed that the cats eat less Addiction too - we think because it's high in good quality protein.

LOL, mommy says I'm okay with my weight, but after a weekend at GrandMonna's and GrandDaddoo's, I might need a diet, lol.
I hope Sadie loves her new foods :)

Food is always a good topic of conversation around our house too! Addiction sounds very interesting.

Food is our favorite topic too! We're glad you like those good, healthy foods and we're very glad you aren't giving up Temptations!!

Thank you for that information. Since Koko is currently on a diet, we might give this food a try. Does it have high protein and low carb content? The reason I ask is Koko has diabetes and needs food like that.

You get a lot to eat! We only give our dog 1 cup a day of Iams weight control plus treats. Our cats don't care of the Temptations treats I bought--chicken flavor. Maybe I should try some other flavor. I never heard of this Addiction kind but am glad your like it. My cats eat the Science Diet for sensitive stomach. I was giving Spunky the canned Fancy Feast which she liked so much that she ate too fast so would always regurgitate it. She does it with the Science Diet too, but not as much.

How lucky you all are to try out this yummy food. And it sounds so healthy too. Any morsels left for me? I love Temptations, too! Love, Moon

I am SO HUNGRY now! Woooo!
Luv,
Dave

Wow! Lucky you guys getting to test new foods! Momma said she'd get some of the Addiction foods for us to try. We like only dry food but since we go outside we get to eat bugs and stuff....Alice LOVES grasshoppers. And although Momma calls me her "chunky monkey", I don't have to go on a diet (yet).

Hi! Thanks for the suggestions on the cat food. It sounds like you found a winner with being able to prolong it in the 'frig.

Check out my blog about a colony of abandoned/feral cats near my home. There will be stories there as time goes on that could inspire and inform anyone you know who wants to help homeless cats.
http://homelesscatcare.blogspot.com/
Would you add me to your blog list?
Thank you,
Debby

Great review! We got to try the Addiction foods too! We liked the canned foods...'specially the unagi...and we liked the dry foods too! But we're with you...we won't give up our junk food treats!!!

For His Grace said...

They look pretty happy about their food. I always thought it would be cool if pet toy companies would give people the opportunity to try out new toys. That would be awesome!

I'm afraid Harley is going to have to go on a diet soon! The vet doesn't think pizza and cheeseburgers are working out...lol :)

I wish someone would send me people food. I could a break from cooking!