We hope all our US friends enjoyed their Thanksgiving! I slept through it. All of it. Well, I did get up to eat but other than that, I slept. I'm up today just long enough to see what's on the Birdie Network. As you can see, I also got rid of that awful cone. I'm a good girl so I don't need it... 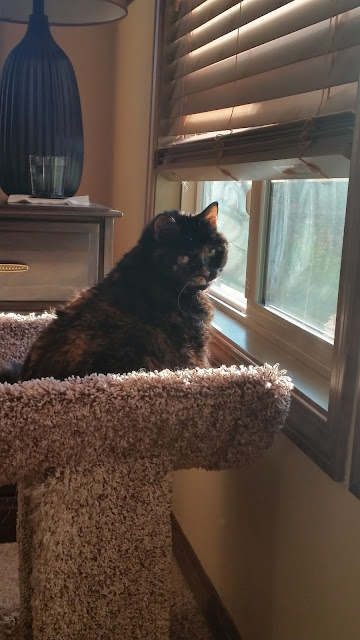 Anyway, I'm going to sleep through the rest of the day and probably the weekend too. I'll feel better soon though. Mommy says I have to, there's no other option.

I do want to thank everyone for all the purrs and prayers for me during all this. I can't begin to express how much it all means to me and my Mommy and Daddy!

Hope you have a wonderful weekend!
Isabella

PeeS: Mommy here: Isabella is eating very well despite losing all her teeth but she started sneezing Tuesday, the day before her dental surgery. We told the vet this on Wednesday but she said her lungs were clear and even sounded better than they had at the initial consultation several weeks ago. By the time Isabella got home on Wednesday her nose was very runny and she was sneezing a lot. Yesterday her eyes were watery and the sneezing was pretty constant. We started the antibiotics Wednesday evening so she's now had four doses and it seems to be working a little. If she's not better by tomorrow we'll take her in but we're trying to avoid another car ride. Also, we noticed they cut her nose in two places which is very upsetting and we have no idea what would have caused this. This has been such an ordeal for all of us but hopefully she starts improving and that Angel doesn't catch whatever she has either. Angel won't even be in the same room as Isabella so at least that's one good thing right now.

Labels: finally Friday, I'd rather be sleeping, Isabella, not feeling good, recuperating, Thankful, we appreciate everyone

Oh I would be on the phone about the nose thing - but maybe from something they used during surgery? oxygen mask or something? Bella will be resting for some days - but happy.

Yikes on the cuts on her nose. I know you'll check into this.

I'm glad she's got the cone of shame off, but the sneezing and runny nose isn't good. It may be the medicine they gave her yesterday. It could be that simple.

Still sending purrs to you Isabella.

Have a purrfect day. My best to Angel and your peeps. ♥♥♥

I'm sending purrs Isabella's way - I really hope that cold clears up without a vet visit! I was thinking the same thing, that the cuts on her nose may be from the oxygen mask being on too tight. But I would definitely ask.

Oh my, I wonder what the cuts on the nose are from. Hope they have a good explanation for that. I'm surprised they didn't point it out and explain it before she left

All of us over here at Angel Prancer Pie are purring very hard for you, Isabella. Please feel better soon. Sending gentle >>nose kissies<<.

That does sound like the cuts on the nose have something to do with the surgery. Poor Bella. Hope the cold clears up soon. We sure send purrs from EVERYONE here. Big hugs to the Mom and Dad too.

OMC Mommy wuld be all over da VET 'bout da nose cut. Weez so sorry this has happened. We unnerstand da not bein' in da same room fing. Me only has to be in da office fur sis Lexi to hate me and stay away. Fankfully it;s always short lived. Weez sendin' purrayers fur everypawdy and hop Esabella recovers quickly.

Glad to hear the cone is off, and hope that she is feeling better by tomorrow and doesn't need another car ride!

We're iced in, so we're doing a lot of sleeping, too. And helping put up the decorations. Mom said I've been a BIG help!
We hope your nose is OK! And that the antibiotics help with everything else! We'll keep praying for you!
Yours sincerely,
Margaret Thatcher

We continue to purr for you, Isabella, and hope you're feeling better soon.

Hurray for the loss of the cone. But what a bummer to have those cuts on your nose - what did they do to you??? We sure hope the antibiotics kick in quickly. Your Mom doesn't need to have you sick now either. Feel better, Isabella.

We sure hope Isabella is feeling better now...it really has been a big ordeal. We also hope you get an explanation of what the heck happened to give her two cuts?? Good luck and keep us posted. Hugs to you Isabella!!

That is odd that they cute her nose, poor kitty. I am glad she doesn't need the cone of shame anymore and that she can eat. I hope she feels better soon. The tooth fairy just got her package mailed out today. :)

Sweet Isabelle, sleep is the best thing for you now. It will help you heal. We hate that your nose got cut. Our mom would be really pissed by that. Hope Mom Sharla is feeling better. We will continue to keep you in our purrs and prayers. XOCK, Lily Olivia, Mauricio, Misty May, Giulietta, Fiona, Astrid, Lisbeth and Calista Jo

Aw, poor kitty friend! I'm so sorry that you had to go through this and I hope that you are feeling better soon. Losing the teeth will just help you to be healthier in the long run. And you will figure out how to eat in no time.

Bummer about the sniffles and the cuts on the nose. I'm sure they took good care of you, but sometimes, stuff happens. I'm just glad that is the worst of it.

Oh Isabella...Poor poor sweet beautify girl. I am so sorry about the cut and about the cold too. Bless you sweet girl. feel better soon and I h=think your mommy WILL be calling about your velvet nosie being hurted!

We're iced in too so loads of sleeping by the fire....
Are you being good and taking your pain meds too? That can make you a very sleepy girl!

Poor thing, I hope she is better today.