Welcome to Tasty Tuesday!  Yep, I said Tasty not Tortie because why should my sisfur hog all the Tuesdays just because she's a Tortie.  Anyway, Isabella's bowl is dirty so I'm the one who gets to try out some foods sent to us by the kind folks at Chewy.com.  We received Merrick Purrfect Bistro Grain-free Sliced Beef Wellington and also Merrick Purrfect Bistro Grain-free Grammy's Pot Pie... 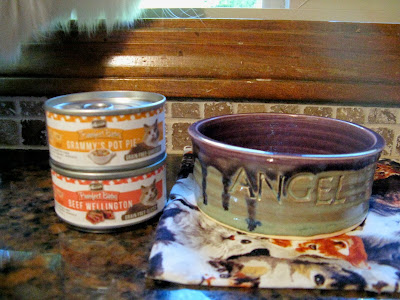 I'm trying the Grammy's Pot Pie today and we were concerned it'd have whole peas and carrots like certain other brands because we refuse to eat those.  It does contain some veggies but they are mixed in enough that we didn't even notice.  Too bad Isabella noticed that I'm doing this taste test... 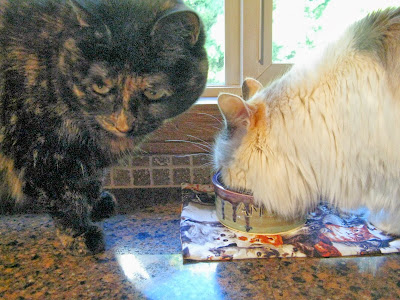 Even though her bowl is in the dishwasher, Mommy got her out a small bowl so she could test it too.  Talk about spoilt... 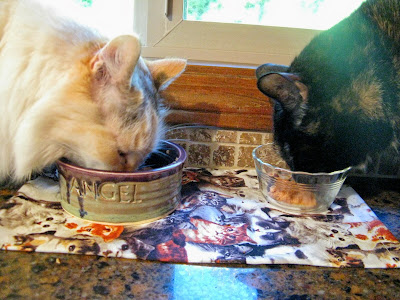 And of course she made sure nothing was left in my bowl too... 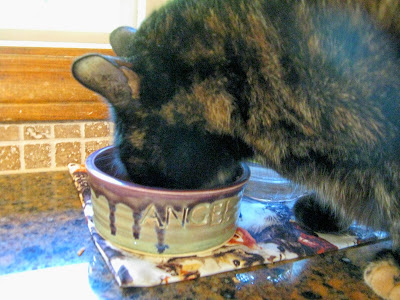 The Beef Wellington was a hit with both of us too.  Since we tend to like foods at first and then maybe not the next day so we have a stockpile of foods we won't eat in the pantry, we sampled these over several days and we cleaned our bowls every time.  We give them four paws up! 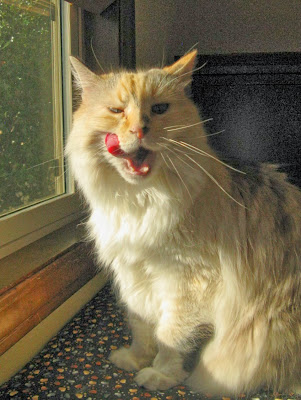 There are several different flavors of Merrick Purrfect Bistro Grain-free foods which you can see here at Chewy.com including one called Thanksgiving Day Dinner!  We're certainly going to be trying other varieties and if you'd like to do the same, be sure to order from Chewy.com where there'll ship right to your door for free on orders over $49!  You can also do auto ship so you're never out of foods or treats or toys or litter!

I kinda like Tasty Tuesday much better than Tortie Tuesday.  I'll have to send out a memo!

Hope you enjoy something tasty today!
Angel
Posted by BeadedTail

Angel, I had to tell Binga that today wasn't her day too!

That is obviously a very nommy food!!! Thanks for the review!!

We just stick with one food, same old same old so Spunky Doodle's stomach doesn't get upset--even then it sometimes still does.

Obviously very good food since you ate it for several day's :)
XOXO

Hi there Angel. Good to see you on a Tuesday even if it is tortie Tuesday. We have tried those foods too and most of us liked them. We are not crazy about the food with the chunks in it.
Hope all of you have a super day.
Take care.

The Furries of Whisppy said...

That must be really yummy food. We are surprised Isabella's bowl was "dirty". Heehee.

You both look like you enjoyed that food very much. I think it's a hit.

Have a purrfect day you two cutie pies. My best to your mom. ♥♥♥

You two look very satisfied with your foods

Maybe you two can alternate between Tortie Tuesday and Tasty Tuesday. Your bowl is so nice Angel. Did someone make it especially for you? The photo of you licking your chops is so cute. Happy Thanksgiving to all at your house. Purrs and hugs, Lily Olivia, Mauricio, Misty May, Giulietta, Fiona, Astrid, Lisbeth and Calista Jo

Seeing your face on this last picture I can understand why you prefer Tasty to Tortie Tuesdays ;-)

I can tell by that last picture just how good these were.

If you guys like it, then I'm sold. Those are pretty fancy bowls too.

We tried these foods and we really like them too!

Glad you liked your noms! That last photo says it all.

We can't tell what food Grace will eat from one day to the next! Thank goodness we have the ferals at work--they enjoy all the foods Grace won't eat! Then I don't feel like we are wasting good cat food.

I'm glad to read that we aren't alone in this battle.

Those sound yummy! You're lucky to do all that taste testing! Save some for me! Love, Moon xoxo

Hey Angel! You are rockin' this review!! Just look at you licking your chops!! These sound like really great foodables...tasty! Happy Thanksgiving! xo Chloe and LadyBug

Greetings, kitty-cat friends! That all looks really yummy! I eat something called "puppy kibble" and it's really quite delicious! Then this MORNING, I got to try something called "yogurt". Oh my! Have you ever had yogurt!?!? It is the yummiest thing EVER!!! You should ask your mama if you could have some. Use my head-tilt; that's how I was able to get a taste!
I really like your pretty bowl, Angel.
Yours sincerely,
Margaret Thatcher

Happy Tasty/Tortie Tuesday and happy Thanksgiving to your Mommy and Daddy too! :)

You kitties get the best snacks!
xo Catherine