First of all, we want to say a heartfelt thank you to everybuddy for the well wishes, crossed paws and purrs for Sadie.  We can't thank you enough for keeping her in your thoughts and we appreciate all of you!

Although Sadie is still at the vet's, we wanted to update everybuddy on what they found out today which is basically that she's a mystery.  The ultrasound showed that she has old lady kidneys but it didn't indicate kidney failure so there's no explanation for why her kidney enzymes are sky high.  There's no sign of cancer or anything like that either.  There was a spot on her spleen and something else, which we forgot what Daddy said, that confirms the Cushings disease diagnosis but doesn't explain why she is feeling lethargic and won't eat and just makes a mess with her food like this: 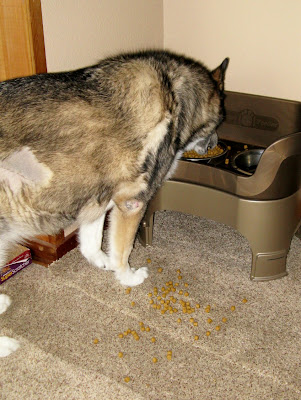 She's never been a messy eater but now she just licks her food and spits it out or most of the time she won't even touch it.  She did eat a little wet dog food (when mixed with cat food!), a little pancake and some ham yesterday.  Daddy also made cookies without chocolate chips so she could have some (actually, we all did!) and she liked those.  She turned her nose up at turkey, roast beef and even her favorite treats though so we don't know what's going on.  We've tried a lot of tricks (except baby food which Khyra just told us about) but hopefully we can find something that'll get her to eat.

A radiologist will look at the test results again tomorrow and the vet will call Daddy with a full report (because Mommy can't handle vet news - she's weird that way).  We're hoping to find something that we can fix instead of this big mystery of what is happening to her.

Thanks again for keeping her in your thoughts!

PeeS:  Another update:  The vet looked in her mouth while she was still sedated and didn't see anything causing her to have pain when eating but said that if she has an upset tummy she would act like something is bothering her mouth because she's not wanting to swallow the food.  We tried giving her Xantac but it made her throw up so we don't want to do that again!  We don't think she wants to do that again either!

Purring for some good results and an answer to the mystery.
-JB

Oh boy. We are praying here for good news too.

Maybe she needs a puppy ;-)

Oh dear...I am SO sad to hear that Sadie is not doing well. I will say a special prayer that she gets better very soon. Take care.

Oh dear...I am SO sad to hear that Sadie is not doing well. I will say a special prayer that she gets better very soon. Take care.

Big Hugs to Sadie, Mom , Dad and furfamily!! We will keep everything crossed for good news tomorrow.

I absolutely will keep your baby in my prayers. I know how it is.

Oh, how we wish there were answers. Sadie, don't be like Phantom, just eat!!! Mom said to try sprinkling a little bit of parmesan cheese or some stinky cheese on top of her food, sometimes it works with Picky Phantom.

All paws crossed for our pal Sadie.

Oh, I so hope she feels better soon. I can't stand when one of my 'family' isn't well. She's in my thoughts. Deb

We'll keep sending our purrs up to Sadie! Could it be a tooth/mouth problem? Does she drink water still?
We just want her to be well.
Head-bops to the Mom and Dad.

Goodness - such a worry! Sadie girl we are sending you all our love and best wishes that your vet finds out what the heck is wrong! We need you to eat and keep up your strength for your Sadie day strolls!
Sending our love!
xo Catherine & Banjo

I sure hope you get some answers soon!
But I'm sure glad the "c" word and kidney failure were both ruled out!
We're still keeping our paws crossed here Sadie :)

I hope they find out what's wrong! Sending Sadie love and hugs! We're praying for the best! xoxo

Sending all our love

Stop on by for a visit
Kari
http://www.dogisgodinreverse.com

We hope the v-e-t can figure out what is going on with Sadie and it can be treated.

When we get upset tummies, our v-e-t told our mom she can give us pepcid (which is different than xantac). Maybe you could try that with Sadie?

Oh dear, oh dear - Will keep Sadie in our prayers...and hope the mystery is solved soon...

We came back to let you know we're not sure of the pepcid dosage for a dog Sadie's size. Us cats get 1/4 of a 10mg pill once a day. 10mg pill is regular strength pepcid, not maximum strength which is 20mg. We hope Sadie is feeling better soon.

Hugs and prayers and Pug Snorts and Slobbers from Chloe. I hope they figure out what is wrong with poor Sadie girl soon....for both Sadie and her Momma's sake. Thinking about you Sharla and keeping thoughts close to my heart.

Thanks for the update! You're in our prayers, Sadie (and Mommy and Daddy)!

I really wish the vets would come up with something concrete to work on helping Sadie get well. I'm continuing to purr for her, and for the vets to finally figure out a course of treatment.

I am very sorry they have found nothing definitive. I hope that they do. We will continue to send positive thoughts your way!

The Adventures of Scarlett and Melly said...

Sorry you are feeling bad, Sadie. We haven't been around Blogville much, so we just found out. Hope you get to feeling better soon.
Stanzie likes the canned (people) chicken from Costco, when she is being a picky eater. It's in those tuna size cans. Stanzie gets half the can and mom makes sandwiches with the other half!

My fingers are crossed everything turns out alright!

There is nothing worse than not knowing what is wrong with a beloved pet. Purraying for Sadie ((big hugs)) Duni

The Furries of Whisppy said...

We're keeping Sadie in our prayers.

Could it be a stuffed up nose? When Au had a chest cold, he couldn't smell his food properly and he thought all food tasted icky.

We're purring for our sweet Sadie. Please keep us updated.

Wow, this is so scary that they can't even figure out what's wrong! Will keep praying for poor Sadie and hopefully she will start eating again today! Poor doggie, I feel so bad for her. . . and you!

Glad to hear an update and glad it isn't kidney failure. WE are sending so many purrs and woofs and some hee haws too. We sure are hoping that they can figure out what is wrong with her. Sharla, we are sending you tons of big hugs. We know this is driving you nuts.

Continued purrs and purrayers for Sadie.

Trust me, I know exactly how you feel re: a "mystery" illness. I think it's far more stressful than having a real diagnosis--at least then you can take action of some sort. (Thinking of my Annie here.)

I want to suggest you get a second opinion from another vet at a different clinic, if you can. In retrospect, I ought to have done with that Annie, but I made the error of trusting the vet too much, IMO.

So don't feel guilty if you do go the route of a a second opinion. It can't hurt (except your pocket book, or in my case, my credit card--lol) and it might even help.

Wow...I keep thinking about you Sadie! How hard to feel like that and not know what's wrong. Hopefully they'll find something soon!

Woo, Sadie! We were hoping for some good news! We're thankful there's no bad news ... but we were hoping the vets would be able to figure out what's going on! Please know that we're all praying for you!!!
Luv,
Dave

We're all purring for Sadie. It is so frustrating when they won't eat, so we purr she starts eating good! Sometimes a toofie problem can be the cause, so I'm glad they checked out her mouth.

I'll continue to pray for Sadie! I was going to ask if maybe she had a painful tooth or something, which would cause her not to want to eat, but I'm glad the vet checked. Could she have maybe gotten into something when she was outside?
I hope she gets better very soon!

Well I like a good mystery but not this kind. I do hope they find out what's going on soon. Will be keeping Sadie in our thoughts.

All the kitties here, Sara, Lill-Kajsa, Matilda and Peep are purring for you, and I am praying for you Sadie. You dear sweet dog.
Kind regards,
Anna