This Is Us This Week

We've been kind of quiet around here since 'tis the season of taxes. Don't worry, we take time off to watch snowflakes... 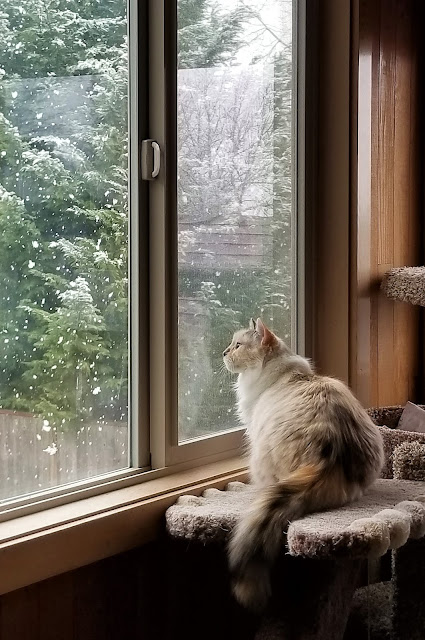 We've also been quiet since we've all had to go to the vet for our check ups. I had a follow up blood test after the one I got for my dental last fall showed I was close to having hypothyroidism. Well, now I do have it. Since I turn into the Tasmanian devil when given a pill, I have to have stuffs put on my ear every day forever. Because this isn't as easy to regulate as a pill, I'll be tested more often to see how I'm doing.

Isabella's exam showed that she's dropped in weight from 14.75 lbs to the same size as me - 11.2 lbs. Turns out she's hyperthyroid too! None of us would've thunk it! She'll get pills every day forever since she has no teeth but she'll swallow it in half a pill pocket. A whole pill pocket is too big to swallow. Other than us both being hyperthyroid and Isabella having asthma, our tests showed we're healthy and doing well as senior kitties!

As for Lexi, her exam was fine. She's 57 lbs and just plain hyper. She'll be spayed soon but the vet suggested she go through a heat cycle first. Oh joy. He said that waiting decreases hip and joint problems, however, it also increases her chance of cancer from 1% to 5%. Since the hip issues are more likely, she'll probably have to wait. Whenever it's done we're all hoping it calms her down. She's been in obedience school for five weeks and will officially flunk out at her final class next week. That is if Daddy takes her. It's not that she's a dumb dog like Bella and I think she is, because actually she's super smart. It's because she's too friendly and wants to play with the other dogs and their peeps. She listens to Daddy as long as he has treats but she knows when he runs out so does the doggy version of  "lalalalala, I can't hear you!" Let's just say, she better be glad there's a room full of witnesses! Anyway, she's a pawful in public and we're hoping she grows out of it. Soon.

That's the update on what's going on around here. What's new with you?

Hope you enjoy your weekend!
Angel
Posted by BeadedTail

is there a dog play group that you can join so Lexi can get all that friendliness out of her system?? I wonder if that would make it better?? (I don't know anything about dogs)

Sounds like a crazy day at the vet! I hope everyone is taking their pills and staying healthy.

Wow....both of you are hyperthyroid? We hope you both get it under control and take your meds like good kitties.

So sorry both kitties are hyperthyroid. But hopefully the medicine will help. Hopefully the spaying will calm her down.
Obedience school was wonderful for our Ande dog. I had her spayed when she was old enough. I think six months. Good luck to all of them.

Years ago, when Annie was diagnosed as hyper-t, I read that there was some suggestion that it could be triggered by tinned cat foods (the tin, I guess). I can't quite remember, and it might not be true. Anyway, I will be keeping you both in my thoughts! BTW, if your ear gets irritated from the meds, which is possible and is what happened to Annie, it's possible to apply the meds to the kitty armpit too, though that does require having the fur shaved.

There are lots of resources on the web, of course, and if you're open to homeopathic meds, Cheri (Cats of Wildcats Woods) might be a resource.

Nicki and Derry are sending purrs!

We're sorry to hear both of you have been diagnosed with hyper-T. Wally was diagnosed with it too...and we never could get things under control but he had other health issues as well. We purr all goes well for both of you and you both take your medicines. Has your mom considered getting either one of you the radiation iodine treatment which cures it? Just a thought.

Sorry you both are hyperthyroid. I have 5 cats with it. KaTwo tried the ear stuff and it didn't work for her, I wish you better luck.She has a liquid now and I have a hard time getting it into her, but not as tough as a pill.

Oh my gosh...you poor babes having to take meds ever day. Is hyperthyroid in cats something happens a lot? I am a first time cat owner for the last two yrs. I would hate it if my babe got sick. Heres hoping the meds work great for both of you.

Lexi sounds like your typical Golden - full of energy and loves fun!!! Keep at it, she will surprise you one of these day:)

Aw, sorry to hear about having to take the meds but it sounds like you are both doing pretty good other than that.

I'm glad you two are healthy in spite of the hyperthyroidism and Isabella's asthma. As for Lexi... what can you do other than keep trying to train her and wait for her to grow up?

Yikes, sounds like taking those meds is no fun. I sure hope I can stay healthy at my age and weight so I don't have to deal with that stuff.

Been down that road with Admiral. She had the ear med for several years. It was hard to give it to her for the first several weeks and then, I could actually see that she just steeled herself when she saw me coming. Pills...not going to happen. Katie either. I can't agree with the comment a vet offered our friend above me, that canned food causes hyperthyroidism.

Yeah, getting old is not for sissies...and puppies are just, ya know, puppies. A Pug puppy glommed onto me the other day in my building lobby and nothing her human did could convince that puppy that it was walkies time - so I had to walk with the human and the puppy outside and over to a grassy area so the puppy could do their puppy business and that distracted her enough for me to make my get-away! Puppies - sheesh!

At least you have both the kitties on their meds. That's a good thing. Extra lovies coming from Auntie Sandee. Lexi sounds like a lot of fun, but puppies are a handful. All of them pretty much.

Have a fabulous day and weekend. Pretty soon tax season will be over. Scritches to the kitties and the pup and my very best to you and J. ♥♥♥

We're sorry to hear about your thyroid issues! We hope the meds get everything under control!
Lexi is bigger than we are!!!! WOW!!!! Maybe if you get another puppy for her to play with ...
HA roo roo rooooooooo!
Cam and Mags

We spent yesterday watching the snow fall as well. Lexi doe sound like a handful. Hope she doesn't really flunk out of obedience school. Sorry for the hyperthyroidism. We know that is often a problem for older kitties. Sending purrs and POTP that you both get regulated. Please tell your mom that ours thanks her for the birthday wishes. XOCK, angel Lily Olivia, Mauricio, Misty May, Giulietta, angel Fiona, Astrid, Lisbeth, Calista Jo, Cooper Murphy and Sawyer