The reason my mom and I decided to sell jewelry through our BeadedTail shop was to raise funds for animal awareness causes. Each month I donate the proceeds from our shop to a worthy animal charity. In October the chosen charity was Alley Cat Allies and I want to share what I've learned from them about feral cats and bring awareness to issues resulting in the deaths of countless cats every day. Here are some of the things that we need to be aware about:

The issue of feral cats is very near and dear to my heart because the alley behind my husband's and my first house was home to many feral cats. Of course I befriended several of them and one even was brave enough to come into our house but didn't want to be touched very much. Our two kitties, Reebok and Panther, were actually orphaned feral kitties that we found in the alley and raised from the bottle into adulthood. We lost Reebok to cancer in 2001 and Panther was 18 years old when she passed away in 2006. 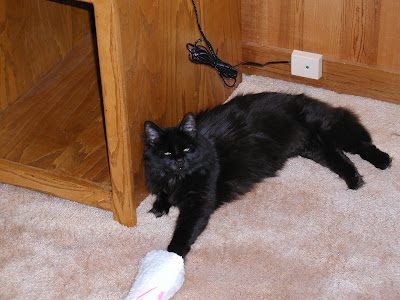 What I have since learned from the information provided by Alley Cat Allies is that if anyone had taken those feral cats into a non-no kill shelter thinking they were helping the cats by getting them off the streets, there would be no chance of adoption and the cats would be killed. The reason being is that shelters handle adoptable cats and one that is afraid of humans certainly doesn't fit that criteria.

I just want to spread the word and let people know that feral cats do not belong in animal shelters. If you come across some feral kitties that you want to help, please check out Alley Cat Allies website for information. Together we can educate others about the need for Trap-Neuter-Return programs to reduce the cat population and keep feral cats out of shelters. We can make a difference and save lives!

You are so right! At our local shelter, there is only room for about 70 cats, maximum. If they took in feral/unadoptable cats, they would quickly fill up and just become a "warehouse" facility for those cats, and the cats would be miserable confined there.

Good post. People need to be aware of ways to help feral cats without creating problems for other homeless cats.

That's wonderful that you donate money to such worthy causes! Jane wasn't exactly feral...she just showed up as a stray but wasn't 'wild'. I think the catch/spay/return program is excellent!

Great article. Thanks. I think many of think we are doing the right thing by taking them to humane shelters.

It is wonderful to see people trying to make a better life for homeless and helpless animals.
Marnie

Thanks, Sharla, for featuring Alley Cat Allies - they are a great organization! We have a local animal welfare group that does Trap-Neuter-Release (many localities do) and they do wonderful work also.

Tasha was a feral kitten, so caring for ferals is really important to me.

Thanks for all you do for kitties!
Play bows,
Zim
PS: We hope it's OK - mom is linking to you from her bag blog http://bagsbykzk.blogspot.com/. If there's a link you'd prefer other than this one, please let us know!

Just wanted to let you know that I think what you are doing for the animals is so wonderful, so commendable, so FANTASTIC!!!
Thank goodness there are people like you who care. The world needs people like you and your family!
I donate to our shelter regularly and all of my and my mom's cats were rescued from a shelter or off the street. We love animals.

I wish I could do more... sometime soon, let's team up and see if we can really make a difference for ferals.

(btw, now that you're home and my life is calmer -- for the moment -- I can tell you that copies of The Demo Tapes are now available! Drop me an e-mail (on my profile page) if you want details.

I am so glad that you are educating people about this. We have two feral cats that we feed and give water to everyday and leave the garage slightly ajar for them in the winter. I trapped both of them in a humane trap and got them shots and spayed/nuetered and rereleased them. I knew if we took them to the shelter that would be it. Thanks for this post!

It's wonderful that you're helping animal charities and spreading the word about feral cats. Where my mom works at the university, there's a trap/neuter/return policy because there are a lot of feral cats there. In fact, our vet is one of those volunteering her services to neuter them.

That's very dear to my heart too beaded!!

All of our animals (4 dogs and 2 cats) were adopted either from the street or from people who didn't want them anymore...

Neutering is definetely very very important for all pets' sake... All my animals are spayed/neutered too...

Aren't we rocking human companions to our animals???

That is interesting, I did not know that, but it makes sense. What a great cause, it is that you are supporting! by the way, the black cat in the photo, looks identical to my cat!

That beauty of a black cat has to be Panther! So special that you adopted them from the streets and gave them lifelong love.

I too adopted a ferel cat, my first, from under a house. There was a sign for free kittens. When I knocked on the door, I was told I could have any one that I could catch.

Needless to say, I spent quite a lot of time there that day until I met "Grocho". She was black & white, with a perfect "Grocho" looking mustash, and she growled the entire time we were together and for a time after she came home with me. WOW, did she turn out to be a wonderful furbaby!!!

There should be NO ferel cats, and I thank you for making a point with this blog posting.

Great post! I honestly hand't ever thought of it this way. The neuter and relase program is a wonderful idea! ♥

My Spunky Doodle was born to a feral cat. I'm glad I got her when she was just a kitten--she's been an excellent pet!

Excellent blog even for today's world.