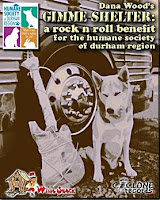 Thanks to fellow blogger and animal lover Susan from West of Mars, I was made aware of an animal shelter in Canada, The Humane Society of Durham Region , that recently experienced a devastating fire which killed many animals and left the shelter in the process of becoming operational again. This is a horrible tragedy and since I have many Canadian visitors to my blog, I wanted to let you know of an event happening on January 17th to help raise funds for this shelter. If you're in the area, mark your calendars and help out this shelter in desperate need! There is also information on how to donate to help them on their website - click on the shelter name above.

The following was taken from Bravewords.com regarding this event:
On 18 December 2008, tragedy struck. A fire ripped through the Durham Region Humane Society in Oshawa, Ontario killing 140 animals sheltered there...a horrible end for what may have been the start to a bright future.

SPCA spokesperson Alison Cross said, "The facility was destroyed. Many animals lost their lives during the fire and it has been very traumatic for the staff and volunteers -- they spend every day trying to give these animals a second chance, and then to have something like this happen is just devastating."

Now, in a positive response to such a tragic event, the music community is coming forward to help out in the best way it can. Aptly named, "Gimme Shelter: A Rock n Roll Benefit for the Humane Society of Durham Region", musicians are lending a hand by playing for 8 hours of continuous music. The event will also host auctions of original artwork, music memorabilia, vouchers from local businesses and door prizes to raise money to help the Humane Society rebuild.

The event has been endorsed by the Humane Society of Durham Region and is being held at The Wing Shack Bar & Eatery, 1121 Dundas Street East, Whitby, Ontario on January 17th, 2009 from 6pm to 2am. Admission is a donation of $15.
Posted by BeadedTail

What a tragedy! It's so sad when things like that happen.

Sniff, sniff....
You know we'd be there if we lived anywhere remotely close to Ontario.

That is so awful, I am so very sorry to hear of this. On a good note it is wonderful to see people come together and help in such a horrible crisis such as this. I would love to be able to go. Great post by the way.

Oh how very sad. I had not heard of this tradgedy, and unfortunately I am a very long way from Ontario. The fund raiser sounds great, and I am sure it will be a success!

Oh, what a horrible thing to happen to so many furbabies. We hope the Gemme shelter concert is an overwhelming success!

PS. Mom has been using Peachtree since 1987. She started with DOS Version 2 (or 3?). She loves it and wouldn't run her business without it! She's also recommended it to many and taught them a few of them how to use it.

I read about this after it happened - it was terrible. It's so hard for both the animals and the people that help them. I am glad that people are getting together to organize the concert - I know the support really helps the people who work so hard trying to help animals.

My heart is crying...

Oh my gosh that is SO sad!!

Do you have any plans of doing a donation? Please send me a convo if so.
♥

It's wonderful that so many are coming forward to help after such a terrible tragedy.

I have a post in draft about this, too. I haven't been able to dig up any more information about it, though. There's also a comedy show that'll benefit the shelter.

I'm still wishing I could do MORE, though.

That is awful! It's good that they are having an event to raise money to help them!
Hugs & Snugs
Eduardo the Snuggle Puggle

How devastating.
You do have a wonderful blog and many followers. I wish them good luck with the fundraiser and hope they get back to helping the animals soon.

NAK and The Residents of The Khottage Now With KhattleDog! said...

This sad happening was shared on Sibernet -

What a lovely event -

And two things near and dear to my mom's heart: guitars and khanines like me!

What a great khause - if only we were khloser to Khanada, I know she'd be there!

How sad for all those animals and workers. :-( I hope they get lots of support; wish I lived nearby.